I’ve started a new series on my Youtube channel called “Music in 5 minutes (or less) with Mr. Craig. This one ended up being 5:15. OOPS!! Check it out and subscribe because more is on the way!

My fall session of lessons doesn’t start until the week of September 13th. I thought I’d share a bit about my studio, and show you some pictures of how I’m getting ready!

Parents are welcomed and encouraged to come in and wait while their child is having lessons. I’ve got seating available, right inside my front door!

This is my piano, the instrument I teach from. It was my grandmother’s piano, which my grandparents bought new in 1961. They gave it to me when I was in 4th grade. It’s been in my personal “adult” possession since 2006.

The cabinet on the right also was my grandmother’s! It’s right around 100 years old. It got very full of music, so I got the smaller cabinet to hold books that I’m using specifically for lessons.

If you’re taking online lessons, this is what it looks like on my end! I actually bought the keyboard in January of 2020, to use in composing and arranging music, but it came in VERY handy for online lessons! 🙂

I teach out of my home, and the space (the formal dining room of the house) was one of the things that really drew us to purchasing the house. If you’re interested in learning from me, either in person or online, fill out the I’m Interested form and I’ll be in touch! 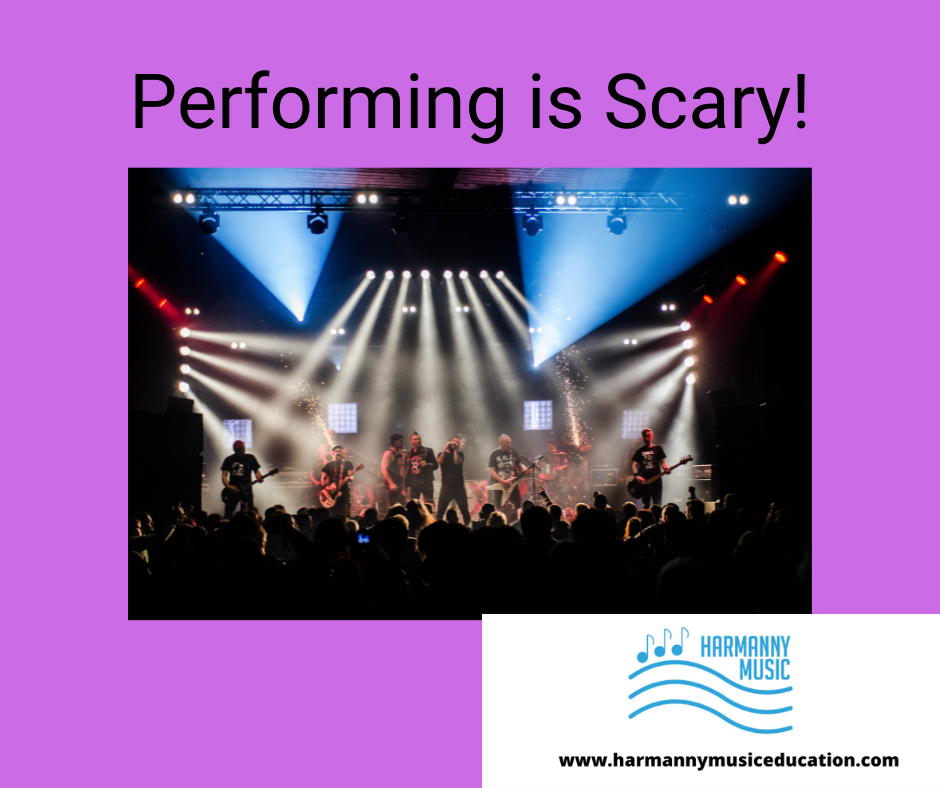 We all from time to time have gotten those butterflies in our stomach before having to speak in front of a group, or play music, or whatever the case is. That’s not the worst feeling to have. It says that we care, we want to do our best, and our body is reacting.

As I tell students regularly, I have NEVER seen anyone stand up in the middle of a performance and yell out “You made a mistake!!” Or, come up to the performer or group after the fact (unless it’s their job as a judge) to point out every flaw in the performance. It just doesn’t happen.

Last Sunday, I had the opportunity to play the organ in the largest physical sanctuary I had ever played in. Now, I’ve been playing the organ for almost 28 years, and I’ve played in a lot of churches, and on a lot of different organs. I’ve gotten past those nerves and butterflies….until they showed up this past Sunday! Why? Well, it was because the organist that I was filling in for is excellent, and those are big shoes to fill, along with it being such a physically large space. I made PLENTY of mistakes. But, I had so many people throughout the week not only thank me for playing, they told me that I did an excellent job. So much so, they did not realize that their organist was gone. Wow!

That’s the thing with performing and being in front of people. Whether it’s music or not, we will more than likely have times where we are having to present in front of some form of group. And it’s one of the great things that you get out of learning and making music. You will at some point be performing for a group of people. And making music is such a personal and connective thing, it helps to prepare you for those times down the road when you’re making a presentation for work, or wherever you are.

So yes, performing can be scary. There’s no doubt about it. But, the more you do it, the more comfortable you will become. Try it. Again and again. It will help!

Challenging yourself is HARD. But, when you push past those times you may want to quit and continue to make slow and steady progress, you will look back and find that it wasn’t as bad as you thought it was. That progress may feel small as you’re going, but keep moving forward!

Find out more at www.harmannymusiceducation.com

If you’re interested in preschool lessons, check out this video!

One of my most favorite things in music is those little moments that happen that don’t always get explicitly talked about.

Today’s musical moment is a story that I love to tell students when they learn the theme from Haydn’s Surprise Symphony. It’s in the 2nd movement of Haydn’s 94th Symphony. You see, Haydn wrote music that was quite tranquil and peaceful. At least to the king…because it put him to sleep! Well, Haydn didn’t take too kindly to that, and put in a little surprise for the king. Take a listen and see if you can hear the surprise!

Did you hear it? It kind of jumps out at you, doesn’t it? SURPRISE!!! Dynamics in music can be so powerful in many ways. In this case, it woke the king up from his nap! I don’t know if he ever fell asleep again during Haydn’s compositions, but I would be surprised if he did!

Also, check out the newest podcast episode “Get Out of Your Comfort Zone“!

Everyone has a reason why they get started in music and why they make music. My reason? This guy.

That’s me and my dad at the baptism of my oldest daughter. He’s the reason why I’m a musician. You can tell by his collar that he was a pastor. But he loved music and he loved to sing. He regularly played organ music, choral music and (randomly enough) country music. I grew up with his love of music, and regularly in church, I always tried to outsing him. It took me until I got to high school to do it, though.

Today would have been his 85th birthday. He passed away 4 years ago and I miss him deeply. I miss him buying me music (much of the time that I already had) because it was his way of supporting and encouraging me. I miss him saying after I finished playing the organ, “I heard a few mistakes”. He listened to the music enough to know how it was SUPPOSED to sound and while that comment drove me up the wall, he wasn’t saying it out of spite or disappointment. It was encouragement. It took me a LOOOOOOOOOONG time to completely understand that, and now I wish I could thank him for it.

My dad is the reason that I’m a musician. Since he passed away, it’s been challenging to redefine what my reasons for making music are. I feel like I’m making progress on that more and more lately. And I believe that would make him proud of me. Music has always been a part of my family. My paternal grandmother played the piano, cello and sang. In fact, the piano that was in my grandparents’ house growing up is now the piano I use to teach on in my home studio. That love of music was passed on to my dad, then to me, and guess what? My girls love music and make music constantly. That’s the joy of making music. That’s honestly the biggest reason why I make music and why I teach music. It brings people together and connects them through generations. And that’s such a beautiful thing to see.

So, happy birthday Dad! I miss you every day and I’m so thankful for the foundation you laid in me and the encouragement you gave to me. I love you.

Did you know that everyone CAN sing! For some, it’s really natural and easy. For others, it takes a little more work. For some others, it takes a LOT of work. But it’s possible! Check out what Craig has to say! And check out www.harmannymusiceducation.com for more information on lessons.

Music impacts us in different and unique ways. Comment with how music has impacted you in your life!

Wow! This is such a powerful quote! It’s amazing to find the emotion and the imagination in music. I was just sharing with a friend about a song that, on the first time I heard it, I wept. It was so beautiful, so powerful and struck a chord in my spirit. That’s the power of music. It’s the power of music connected together with words.

I’d love to help you unlock that power and beauty in making music. I still have times available in my schedule. You don’t have to be in my little corner of northwest Houston to take lessons. I teach online as well!